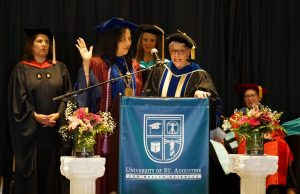 The Spring 2018 commencement ceremony for the San Marcos campus was held on Friday, April 20, at the California Center for the Arts in Escondido. Surrounded by hundreds of family, friends, faculty and supporters, students celebrated their academic achievements at the formal ceremony with caps, gowns, tassels and even a few tears. Diplomas were awarded to nearly 100 San Marcos students who also received their new academic hoods for their ceremonial regalia.

The ceremony was also significant for Dr. Divina Grossman, not only because this was her inaugural commencement as president, but the ceremony provided the opportunity to hold her induction and oath of office as well, officially installing Dr. Grossman as the fifth president of the University of St. Augustine for Health Sciences.

“Today the torch is being passed to a visionary who is prepared to lead the university forward as we become the nation’s foremost, comprehensive health sciences university,” USAHS Board Member Paula Singer told the audience. Former president Dr. Wanda Nitsch and faculty member Dr. Lisa Chase also participated in the installation ceremony, as well as USAHS CEO Vivian Sanchez.

As Dr. Grossman took the oath of office as the new president, she was surrounded by her family on stage.

Tuition Reduction Available for Select Programs When You Start this Summer!

Graduate school is an investment in your future: Earning an advanced degree is a way to boost your credentials and open more doors in your career. And at USAHS, you

San Marcos, Calif.—Aug. 19, 2022—The University of St. Augustine for Health Sciences (USAHS) is pleased to announce that our Master of Science in Speech-Language Pathology (MS-SLP) program has been granted

University of St. Augustine for Health Sciences (USAHS) Chief Executive Officer and Interim President Vivian A. Sanchez has been appointed Commissioner to the WASC Senior College and University Commission (WSCUC). As

USAHS is pleased to welcome Naomi Kinley, MA, as our new Director of Career Services. Kinley comes to us with 28 years’ experience working in HR, recruiting, and university

This Spring, join us for one of our On-Campus Information Sessions and learn more about the University of St. Augustine for Health Sciences (USAHS) and our graduate health sciences programs.

On-Campus Tours Have Resumed—Book Yours Today!

We’re excited to announce that our in-person tours have resumed! Come visit campus, meet students, and explore our state-of-the-art facilities for yourself. While you’re in town, be sure to experience