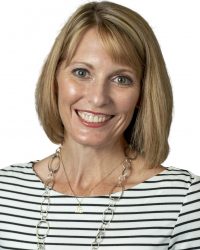 Becky served as the Florida representative to AOTA’s Representative Assembly (2015-2017) and as the Region 3 Regional Representative for the Florida Occupational Therapy Association (2013–2015). She coordinated the North Central Florida OT Forum for clinicians and students (2012–2017) and founded the Annual Speed Dating with an OT event, showcased in the October 9, 2017 OT Practice magazine. Becky additionally developed and co-coordinates “Gator Amps”, an active support group for the limb loss community in North Central Florida, recognized by the Florida Hospital Association (FHA) and the Amputee Coalition of America (ACA). Becky specializes in adult inpatient and outpatient rehabilitation and has been a practicing occupational therapist within adult physical dysfunction since graduating from the University of Florida in 2001. She received her post professional master’s degree from San Jose State University in 2014 and her clinical doctorate in occupational therapy from Chatham University in 2018.

She participated in AOTA’s Leadership Development program for Middle Managers in 2013, AOTA’s Distinct Value ad hoc committee (2014-2015), and assisted with the development of the Distinct Value statement for Rehabilitation Practice (2016). She currently serves as a reviewer for AOTA Emerging Leaders and Board Certification applicants. Becky received the Florida Occupational Therapy Educational Consortium’s Outstanding Fieldwork Educator of the Year award in 2013, the FOTA Award of Recognition in 2014, was granted board certification in physical rehab through AOTA in 2016, and received the University of Florida OT Sandra Edwards Colloquium Outstanding Clinical Contributions Award 2019.