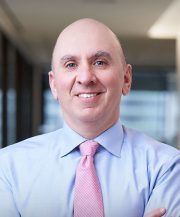 Prior to joining Altas, Mr. Nicoletti was Executive Vice President and Chief Financial Officer at Celestica Inc., a NYSE/TSX-Iisted company with approximately $6 billion in revenues and 30,000 employees across North America, Asia and Eastern Europe. Mr. Nicoletti was one of Celestica’s founding executives. He worked closely with Onex Corporation in 1996 on the corporate carve-out of Celestica when it was a subsidiary of IBM and its subsequent development into a global leader in outsourced electronics manufacturing and supply chain management.

Mr. Nicoletti was educated at the University of Western Ontario (Bachelor of Administrative and Commercial Studies) and the Schulich School of Business (MBA with Honours). He has completed the Leadership Best Practices program at Harvard University and the G100 Next Generation Leadership Program.

Mr. Nicoletti has co-led an annual fund-raising initiative for the Heart and Stroke Foundation and the Canadian Cancer Society, and served on the Audit, Finance and Risk Committee of Habitat for Humanity Toronto.