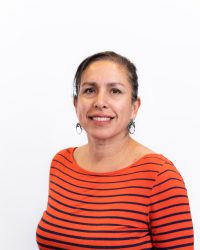 Dr. Claudia Herrera joined the University of St. Augustine for Health Sciences in 2021. She is a graduate of ABC Medical Center, Mexico City, where she received her Bachelor of Science in Physical Therapy in 1995 ( Lic. en Medicina Física y Rehabilitación). She received her Master of Science in Physical Therapy in Orthopedics from Quinnipiac University in 1998. Dr. Herrera practiced in home care, outpatient and inpatient services while lecturing in Mexico and South America during her studies. She received her Doctor of Science in 2019 from Texas Tech University and obtained her Clinical Orthopedic Manual Therapy (COMT)  in upper and lower extremities from the International Academy of Orthopedic Medicine (IAOM).

Dr. Herrera has a special interest in Sports Medicine and developed a course and screening tools for “Overuse Injuries in Triathlon and endurance sports” lecturing to athletes and professionals. Being an avid triathlete, tennis player and former soccer coach, she also served in a pro bono clinic and was later a board member of the Spanish Community of Wallingford (SCOW).

As a physical therapist and athlete, she believes in the power of quality movement to impact the quality of life. She educates her patients, athletes and students from all walks of life, so they can create their own health journeys.