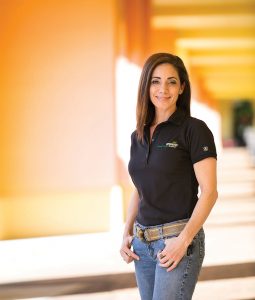 After six weeks of traditional physical therapy, his knee was still swollen. The patient had undergone a knee replacement and followed his doctor’s instructions, but his range of motion was still limited. He was frustrated, anxious to get back to his everyday activities, including on the tennis court. Then he went to see Dr. Niki Varveris ’10, a Transitional Doctor of Physical Therapy (tDPT) graduate. He’d heard that she is on the cutting edge, always learning new techniques and using high-tech tools to bolster the efficacy of manual therapy.

When the patient went for his appointment at PhysioNetics, Varveris’ clinic in Naples, Florida, she brought out something new: the Dynatron X5 Soft Tissue Oscillation Device. The technology creates an electrostatic field between its probe, the doctor’s gloves, and the patient’s tissue and uses a vibrating action to treat acute and chronic pain.

Within 10 minutes of treatment, his swelling was gone and he had full range of motion. “He bent his leg and walked and felt fantastic. He was really shocked,” Varveris says. Within four sessions, he was back on the court. “I’m always trying to keep my ears and eyes open to what’s new and what works. 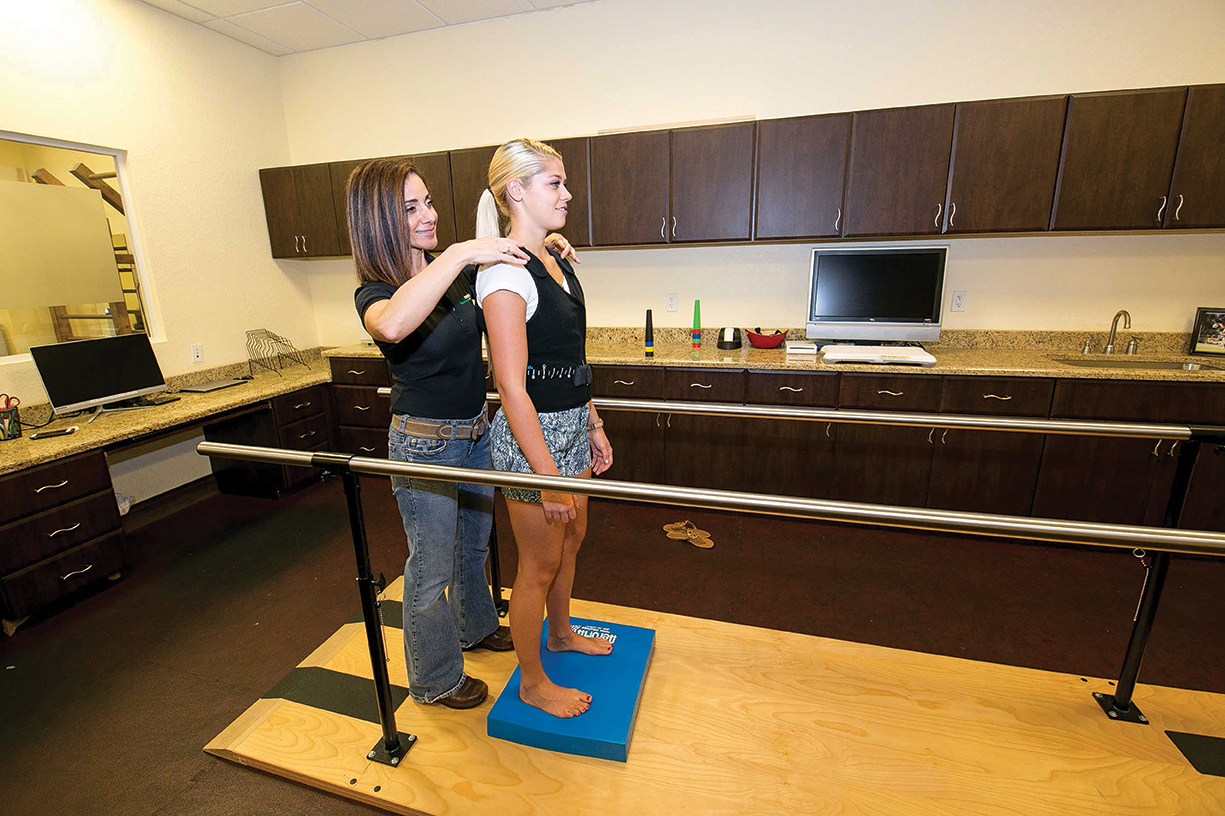 “Sometimes there’s not much hard evidence yet about the efficacy of new technologies, but when we try one and we see in practice that it’s working, we know it’s worth pursuing,” Varveris says. This approach helped her become a leader in the field of physical therapy and the university’s 2016 Patricia King Alumni Award recipient. In a December commencement speech on the St. Augustine campus, she challenged each graduate to be “a professional who will act as a game-changer in health care.”

Varveris attributes much of her approach, her personality, and her interest in education to her father. He was an animal nutrition PhD in Iran, where they lived until she was 13. “I was born in California, but we moved to Iran so he could give back to his home country,” says Varveris, who is half-German, half-Persian.

When she returned to California for college, she got interested in physical fitness and spent time lifting weights and exercising outside. During a weekend of skiing while she was at the University of California, Davis, she hit a bump and fell, twisting her knee and tearing her anterior cruciate ligament. The injury caused her to go to physical therapy.

“I was struck by what they did and what I saw,” Varveris says. “They seemed like they were having fun while helping people, and I could see my own and other patients’ progress. This profession felt like home.”

Varveris enrolled in a master’s program at University of Miami and joined the acute care rehabilitation team at Orlando Regional Medical Center when she graduated. There, she gravitated to neurological rehabilitation.

“I found it to be challenging, yet very gratifying,” she remembers. “Any small improvement was a big deal. To be able to take part in helping someone recover from traumatic head injury was the best feeling. I think neuro rehab really shows what our profession is capable of when it comes to helping people live their lives.”

“To be able to take part in helping someone recover from traumatic head injury was the best feeling. I think neuro rehab really shows what our profession is capable of when it comes to helping people live their lives.”

A few years later, Varveris helped open a new facility for St. Cloud Hospital (now St. Cloud Regional Medical Center) as its director of rehabilitation services. In that role, she managed teams of occupational, physical, speech, and respiratory therapists in outpatient and inpatient settings. She also handled the budget and was asked to meet financial goals.

“This position taught me what I needed to know to start a private practice,” which she launched in 2006, she says. To build her business, Varveris traveled to physicians’ offices to explain all she could do and request referrals, always repeating her motto: “Send me a patient and let the proof be in the pudding,” Varveris remembers saying.

While running her business, now called PhysioNetics, Varveris enrolled in the tDPT program at the university in 2007, completing her degree in 2010. She followed that up by completing an MBA from Florida Gulf Coast University. But she hasn’t stopped there. 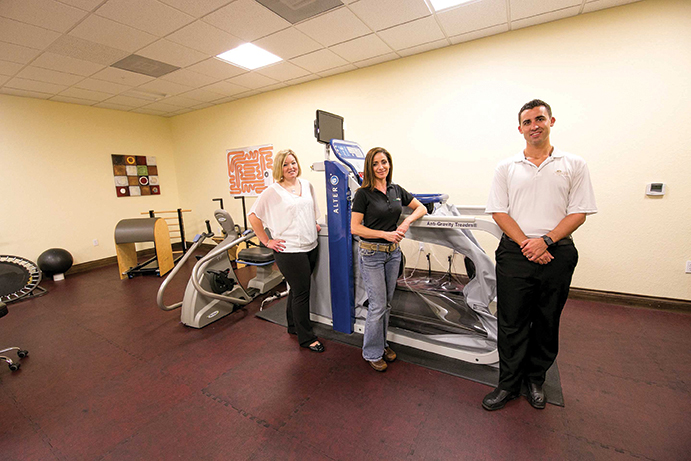 Since then, she has become a Certified Graston Technique provider, a Certified Kinesio Taping Practitioner, and a Certified Balanced-Based Torso-Weighting Therapist. She’s also Myokinesthetic trained. And she’s one of only two physical therapists in Florida who have a Certificate of Achievement in Pregnancy and Postpartum Physical Therapy through the American Physical Therapy Association Section on Women’s Health. Her expanded specialties have improved patient outcomes.

She is also known for her work with Balance-Ware, a postural control and stabilizing vest that can improve trunk stability and balance for patients, including those with multiple sclerosis. Patients have traveled from as far away as Brazil to meet with Varveris for this therapy. At its most basic, the vest works like this: If a patient lists to the right, you can add weight to the left side to even things out.

“The vest seems to change the sensory input. When they put it on, patients will say, ‘My brain feels different.’ It gives the brain and nervous system a little more input about where your trunk is in space,” Varveris says.

With all of her degrees and certifications, Varveris doesn’t keep all that knowledge to herself. She encourages her staff, which includes two physical therapists, one assistant, and a rotating tech, to keep learning, too.

“We just hired a new graduate from the university and right off the bat she’s going to take a course on the Graston Technique. I’m encouraging her and saying let’s make a goal,” she says. “I feel that the more we learn, the better we’ll be able to serve our patients.”

“I feel that the more we learn, the better we’ll be able to serve our patients.”

One of Varveris’s goals is to open a second location and, perhaps, go into teaching. Already she has a close relationship with local high schools, offering volunteer hours to students considering a future in the field. PhysioNetics also serves as a clinical site for students attending several universities.

“I am a strong believer in always continuing to learn,” Varveris says. “Giving back to future physical therapists is a rewarding experience for me. I fell in love with this career. Looking back, it was the best decision of my life.”