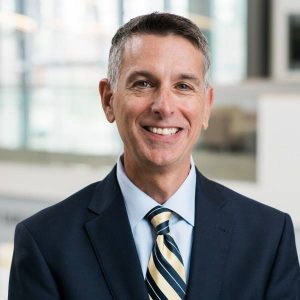 As the University of St. Augustine for Health Sciences (USAHS) continues to advance as the national leader in graduate health sciences education, rehabilitative sciences have been and will continue to be the foundation of our history and success. To expand and strengthen academic leadership in this critical academic area, we have established a new position of Executive Dean of the College of Rehabilitative Sciences.  This role will drive the University’s continued progress in academic quality, interprofessional education, research, clinical preparedness, and strong student outcomes.

We are pleased to announce that Brian Goldstein, Ph.D., CCC-SLP will join USAHS as Executive Dean of the College of Rehabilitative Sciences in September to provide leadership and oversight of all rehabilitative science programs including occupational therapy, physical therapy, and speech-language pathology.  He will also serve as a member of the University’s Executive Committee.

Dr. Goldstein emerged as the leading candidate for this role in a comprehensive, national search because of his distinguished career, diverse background, and depth of academic leadership and administrative experience.  His many years in health sciences education and as a practitioner make him ideally suited for this role.

Dr. Goldstein is an accomplished teacher, scholar and academic leader with more than 25 years of experience in higher education at public and private universities with multiple locations.  He most recently served as Provost and Vice President for Academic Affairs at La Salle University in Philadelphia, where he oversaw three academic schools, developed new programs, and led a successful institutional reaccreditation process.  He also held the position of Dean of the School of Nursing and Health Sciences at La Salle and served as Professor in the Department of Communication Sciences and Disorders among other faculty and administrative roles.

Dr. Goldstein’s clinical experience was as a speech-language pathologist at Massachusetts General Hospital in Boston and Rainbow Community Head Start in Philadelphia.  His interest and specialization is in speech and language disorders in bilingual populations.

In addition to his stellar career in practice and academia, Dr. Goldstein has been the recipient of two prestigious teaching awards, has published five books and more than 30 peer-reviewed publications, and has presented at more than 100 peer-review international conferences with a focus on phonological development and disorders in monolingual Spanish-speaking and Spanish-English bilingual children.

Dr. Goldstein will be based at the San Marcos campus.

We would like to extend our thanks to everyone who participated in the extensive search and interview process for this important leadership role. The involvement of faculty, staff, administration, academic leadership, and USAHS board members helped to ensure the most qualified and fitting candidate was selected for this position.  Please join us in welcoming Dr. Goldstein to USAHS.