At 12:30AM, on Saturday, June 15, 2019, while most of us are tucked in our beds, Assistant Professor Todd Bourgeois, PT, DPT, PhD will embark on an 83-mile journey from Bimini to Florida. He’ll be making that journey on a paddleboard.

What is Crossing For a Cure?

“The Crossing For A Cure is a long-distance endurance paddle challenge and international championship race that takes paddlers 80 miles across the Gulf Stream from Bimini in the Bahamas back to the Florida mainland. It was inspired because of the incredible health benefits of the Ocean for those living with cystic fibrosis,” according to the website. 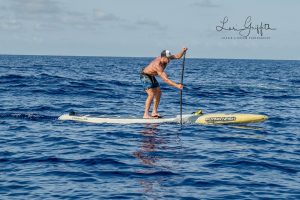 Todd Bourgeois’ Experience with Crossing For a Cure

Last year, Bourgeois participated in the event as part of a four-person team. One of his friends is big on paddle boarding and thought it’d be a fun thing to do as a group.

“We showed up with our game faces on and ready to compete,” Bourgeois said. “But, we quickly realized this was an event much bigger than ourselves. We were so moved by the organization and the event.”

Even though they came to the realization that it was much more about the cause than the competition, Bourgeois and his team were first to cross the finish line.

This year, one of his old team members decided to take the solo ride and Bourgeois scrambled to put a team together, but in the end couldn’t pull one together. He still felt like he needed to be a part of this sensational event and cause, so he decided to take on the challenge solo as well.

“People from my hometown heard about what I was doing and some of them reached out to me to tell me about people in the community who had cystic fibrosis and how much it meant to them,” Bourgeois said. “I knew I had to be a part of this year’s event.”

He will have 18 hours to paddleboard 83 miles, although his goal is to finish in 15 hours. An escort boat will follow alongside him and float out drinks, food and any other resources he needs along the way in a raft.

To donate to the cause, visit Bourgeois’ page and to learn more about the event and even track the participates in the race, visit www.crossingforacure.com.

Is DPT Worth It?

The OT Pinning Ceremony: Marking the Move from Classroom to Practice