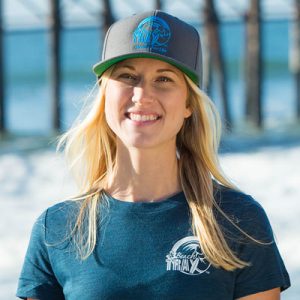 Twichel is the Co-Founder and CEO of Access Trax, which is a company that sells and rents portable tracks, Beach Trax, that allow people who use wheelchairs to access beaches and other community areas.

Twichel and her former classmate, Eric Packard, took a class in Assistive Technology at the University of St. Augustine for Health Sciences with course instructor Maureen “Mo” Johnson. The course challenged them to create a device to help a specific population with a disability. It was then Beach Trax was born.

“We’ve made connections with individuals in South Africa, Hawaii, Canada, Mexico, the UK and Australia,” Twichel said. “There are people in all of those areas who want to help us get this to their communities.”

Access Trax is one of the top 100 finalists out of at least 5,000 business across the U.S. that applied for the FedEx Small Business Grant Award. The company is also in the running to win the year-end $25,000 Amber Grant Award for women entrepreneurs.

Although Packard had to take a step back from the day-to-day operations of the company, Twichel has gone full speed ahead making personal and professional sacrifices to make her vision for the company a reality.

“I had to go from a full-time salary occupational therapist to working only 10 hours a week because Access Trax needs my time and my focus,” Twichel said. “That was really challenging trying to figure out how to survive and still do what I want and need to do.”

The company started out providing Beach Trax to Adaptive Surf Competitions in the southern California areas. The relationship developed and now Twichel has gone to Hawaii for an adaptive surf competition and is slated to go to Costa Rica for another competition next month.

She’s been able to build her business through volunteer work and networking at those events, but the more interest that builds, the harder it gets to run a one-man show. She received some small business loans that carried her through last year and this year she’s taken on an investor and new partner to help scale the business.

Access Trax was also accepted into the first cohort of the CONNECT ALL @ the Jacobs Center Accelerator Program. This program is a strategic partnership between the City of San Diego, Jacobs Center for Neighborhood Innovation and CONNECT. It aims to nurture early-stage, growth-driven startups and supports the entrepreneur community with resources that encourage growth and creation of new businesses. This initiative is designed to create sustainable employment for founders of early-stage companies and employees hired as they grow.

“We have interest from people all over the world to help bring Beach Trax to their local communities and it’s really difficult for one person to try to navigate all of that,” Twichel said. “I’m excited to have a new partner I know and trust, whom I really believe understands and supports the vision I have with Access Trax.”

Access Trax’ latest connection was with Runway of Dreams, a company that focuses on inclusion in the fashion industry. The company partnered with Zappos for an adaptive fashion show in Las Vegas last month and Access Trax was asked to join. Even more recently, a representative for the Cannes Lions Marketing Festival contacted Twichel to rent Beach Trax for the festival this summer in France.

“All of these amazing events are recognizing that they want to be accessible,” Twichel said. “And yeah it’s 2019 and ADA has been around for a long time, but I really truly believe that businesses, cities and communities are just now starting to realize that they’re missing out on 20 percent of our population by not having accessibility solutions and inclusion in everything they do.”

As Twichel watches this movement happening first hand, she and her team are trying to leverage that and the perfect timing of it.

“We’re trying to push that Access Trax and accessibility isn’t only a good thing, but it’s a needed thing,” she said. 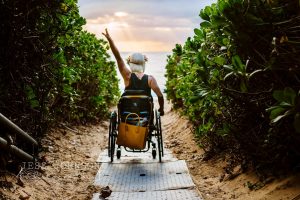 Twichel said that she gets phone calls and messages from people who are in tears of joy because they found her product. She takes pride in being a problem solver, being able to think creatively and help people do the things they want and need to do in life.

“I wouldn’t give that feeling up for anything,” she said. “No matter how hard this journey has been.”

To help Twichel bring Beach Trax to the many communities and individuals who need them, show your support by voting for Access Trax in the Amber Grant Award for women entrepreneurs.