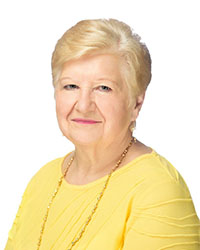 Donna Dorsey is a consultant specializing in nursing regulatory and policy development and leadership. She retired in 2007 as the executive director of the Maryland Board of Nursing. From 2002 to 2006, she served as the president of the National Council of State Boards of Nursing. Previously, she was an assistant professor at the University of Maryland School of Nursing.

Ms. Dorsey was instrumental in the development and implementation of computerized adaptive testing for National Council Licensure Examination (NCLEX); the establishment of a national, unduplicated licensee database (NURSYS); the implementation of the Nurse Licensure Compact; and the initiation of the Commitment to Excellence project to promote ongoing effectiveness of nursing regulation. In recognition of her work, the NCSBN presented her with its highest honor, the R. Louise McManus Award.

She is the author of numerous publications, including WHO/ICN Disaster Nursing Competencies. Ms. Dorsey is a graduate of East Carolina University and the University of Maryland, and is a fellow in the American Academy of Nursing.