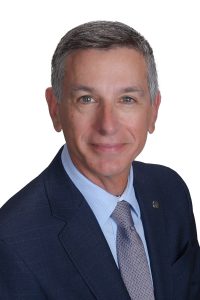 Brian Goldstein, PhD, CCC-SLP is the President and Chief Academic Officer for the University of St. Augustine for Health Sciences. Dr. Goldstein is an accomplished teacher, scholar and academic leader with more than 25 years of experience in higher education at public and private universities with multiple locations.

Dr. Goldstein joined the University in 2019 as Executive Dean of the College of Rehabilitative Sciences to provide academic leadership and oversight of all rehabilitative sciences programs, and in 2020 was named Chief Academic Officer. Dr. Goldstein‘s extensive leadership experience, scholarly record and prestigious recognitions in the field of bilingual Speech-Language Pathology have invigorated and fortified USAHS’ academic foundation, and in May 2022, he became President of the institution, in addition to being Chief Academic Officer.

Prior to joining the University, Dr. Goldstein served as Provost and Vice President for Academic Affairs at La Salle University in Philadelphia, where he oversaw three academic schools, developed new programs, and led a successful institutional reaccreditation process. He also held the position of Dean of the School of Nursing and Health Sciences at La Salle and served as Professor in the Department of Communication Sciences and Disorders among other faculty and administrative roles.

Dr. Goldstein’s experience includes faculty and academic leadership roles at Temple University in Philadelphia where he served as Associate Dean for Faculty and Academic Affairs for the College of Health Professions and as Chair of the Department of Communication Sciences and Disorders. While at Temple, he advanced speech-language pathology program rankings, faculty promotion and development, and intra/inter-departmental research initiatives.

Dr. Goldstein’s clinical experience was as a bilingual speech-language pathologist at Massachusetts General Hospital in Boston and Rainbow Community Head Start in Philadelphia. His interest and specialization is in speech and language disorders in bilingual populations.

In addition to his stellar career in practice and academia, Dr. Goldstein has been the recipient of two prestigious teaching awards, has published five books and more than 30 peer-reviewed publications, and has presented at more than 100 peer-review national and international conferences with a focus on phonological development and disorders in monolingual Spanish-speaking and Spanish-English bilingual children. He received a masters and doctorate in speech-language pathology from Temple University and a bachelors in linguistics and cognitive science from Brandeis University. He is a fellow of the American Speech-Language-Hearing Association (ASHA) and received ASHA’s Certificate of Recognition for Special Contribution in Multicultural Affairs.