Blog home  >  Alumni Spotlights  >  Around the World: Is… 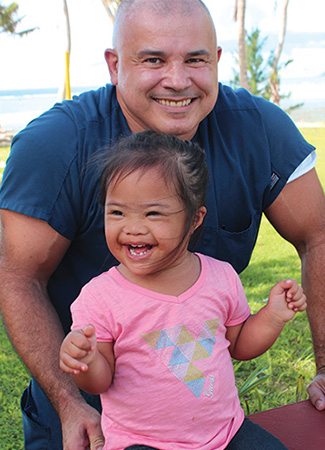 In the morning, Dr. Phil Coppa ’03 climbs into his 4×4 and makes the arduous drive through the jungle. The unpaved road ends at a dirt-floor shanty made of plywood and tin. His client’s home lacks a door, but its occupants are welcoming and eager to see him: He’s here to help their toddler overcome developmental delays in crawling. As a physical therapist at Health Services of the Pacific (HSP), he evaluates and cares for patients in their homes.

For the former U.S. Marine and Doctor of Physical Therapy (DPT) graduate, it’s a regular day in Guam, where his wife, a nurse in the U.S. Navy, has been stationed since 2013. They chose the small South Pacific island in part because of its dearth of physical therapists.

“Home health is the only thriving physical therapy business in Guam due to the lack of facilities and qualified professionals,” he explains. Being mobile allows Coppa to help islanders and have time to serve the profession. Through HSP he sees patients of all ages and acts as the primary rehabilitation consultant at Guam Regional Medical City hospital where he is developing policies and a computer-based documentation system for PTs. He also mentors incoming physical therapists and interns. The demand is great.

“Many people from nearby islands immigrate to Guam because it’s seen as the land of opportunity,” says Coppa. Yet the tropical paradise faces its own challenges: High rates of uncontrolled diabetes often result in amputations and increase the number of patients in need of physical therapy.

To help close this gap, Coppa and his colleagues are developing what will be the island’s only certified outpatient rehabilitation therapy clinic. It will be his legacy when he and his family return to the U.S. next year.

By taking such an active role in health care on the island, Coppa is following the path he says began at the university. “My education taught me concrete skills and how to bring a human touch to patient care,” says Coppa. “Working with the people of Guam let me put this expertise into action.”