They aren’t twins, but Joshua and Kyle Rasmussen share a bond that could rival any multiple-birth sibling closeness. Born just 16 months apart, the brothers became inseparable as kids growing up in Orange County, California. The tight bond they developed in their youth has carried them on a journey through graduate school, and today they both walked across the stage at the San Marcos commencement ceremony earning their doctor of physical therapy (DPT) degrees.

“We did everything together. We had the same group of friends, played on the same hockey team in high school. It’s always been that way for us,” Joshua said.

Whether it was on or off the ice, they were always together. They even share a matching tattoo. It wasn’t surprising then that they both decided to pursue undergraduate degrees in exercise sports science at Concordia University in Irvine. And they did it together.

“We were athletes and very interested in physical health and well-being, and being in tune with the body so it just made sense,” Kyle said.

It was during their undergraduate experience that they were both drawn to a career in physical therapy. After college the brothers worked as physical therapy aides and recognized that PT was something they wanted to pursue as a career.

“Applying to PT school was the natural next step. We applied to the same schools but didn’t know if we would end up together or not; after we both interviewed here and we both got accepted, we decided yes let’s do it,” Joshua said.

“It was an easy decision,” Kyle said, adding that the year-round approach at USAHS appealed to them. “We liked that going here would allow us to graduate faster than the other programs.”

As they would discover, the decision to enter the DPT program at USAHS San Marcos was an easy one because they could do it together, but there was nothing easy about life as a graduate student, even with the support of such a close sibling.

“It hits you fast—just how difficult it is. PT school is the hardest thing we’ve ever had to do, and to have someone there like my brother to support me—I honestly don’t know if I could have done it without him,” Joshua said.

The brothers both agree that the dedication and support of the faculty at USAHS also played a large role in their success in the DPT program. “I’d like to thank all of the excellent professors here for everything they do to support students in and beyond the classroom,” Kyle said. “The curriculum is challenging for a reason; people’s lives are in our hands when we walk out the doors as graduates – that is not something to take lightly. The quality of the faculty really does set St. Augustine apart.”

“It was apparent they have a close bond; they were supportive of each other yet independent and self-driven. Both brought positive energy to the classroom and were a pleasure to have in class,” said DPT faculty member Dr. Kayla Smith.

Other students took note of the brothers and their attitudes, noted faculty member Dr. Edward Kane. “Both are leaders in their class and well-liked by their peers. They came to class with a thirst for continued knowledge and to perfect their techniques. Most important is that they always have a smile on their faces and a positive attitude,” he said.

“Growing up I’m sure they had competitions with each other and I could see that competitive spirit when they were in one of my classes together,” said DPT faculty member Dr. Norman Belleza. “Not in a first-place or second-place competition, but more of pushing each other toward excellence.”

Kyle agrees they inspired and pushed each other during the program, drawing on each other’s strengths. “It’s like having a built-in study buddy. We live together and are always studying or practicing practical skills together,” he said.  “With his internship experiences in outpatient settings, Joshua got more hands-on experience with manual therapy, and that in turn helped me.”

“He’ll hold me accountable if I’m not focused on what I need to be focusing on—and vice versa. Especially when it comes to due dates for assignments. He is really good at keeping track of that. He can hold a lot more info in his big head than I can,” Joshua joked.

With no more academic due dates to worry about, the brothers are relishing their accomplishment together, surrounded by family and friends from across the country who came to celebrate with them today. 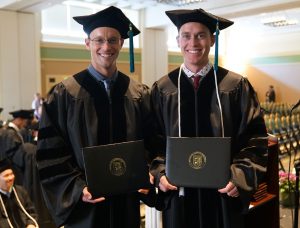 “It was definitely all worth it. We’ve made new friends here that we’ll have for the rest of our lives. It’s been great to have each other to rely on as brothers and roommates, but we also had a really good study group—if you don’t have that, then you’re toast,” Kyle said.

While this chapter in their lives is over, the brothers foresee a future where they will continue to work together as a team. Their long-term goal is to open their own physical therapy practice back home in Orange County. For now, they are pursing full-time positions to gain the experience they’ll need. They also have some family inspiration to one day start a business together; their father, Kelly, has owned a successful landscape architecture firm for more than three decades.

“We’ve learned a lot from our father and how he’s run his business, especially from his focus on how to treat people right –  especially employees,” Kyle said. “He’s definitely inspired us to think about our own business someday.”