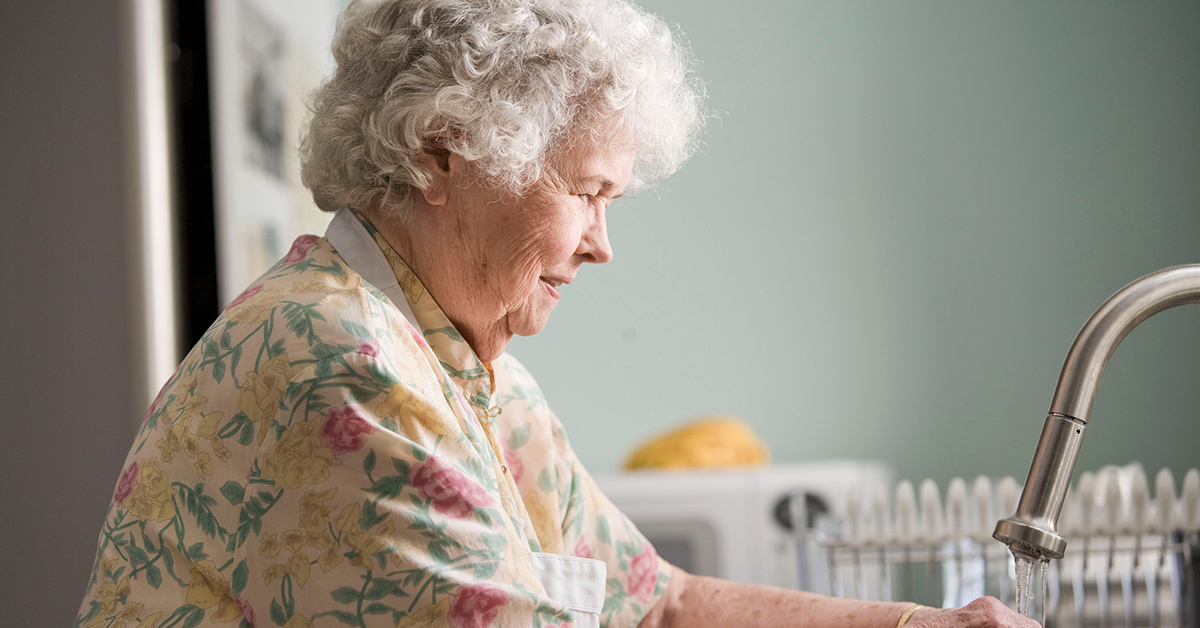 Even in normal times, seniors are at an increased risk for social isolation, which can lead to serious consequences such as depression, cognitive decline, and premature mortality.[1] But in early 2020, when the COVID-19 pandemic led to social distancing mandates across the United States and around the world, millions of older adults became even more isolated than before. The USAHS healthcare community took notice.

The long-term impact of social isolation on seniors is unknown. Taking this opportunity to study it, a physical therapy (PT) faculty member and an occupational therapy (OT) student teamed up in May to conduct a joint interprofessional research project. Their results shed light on how both OT and PT can help older people adapt toward a new normal in the wake of the pandemic.

“After talking to my mother, I realized that the shelter-in-place rules were having a huge impact on older adults,” says Christine Childers, PT, MS, PhD, associate program director of the Flex Doctor of Physical Therapy (Flex DPT) program on the USAHS San Marcos campus. “I wanted to study that impact, and I thought I needed to do it quickly because the shutdown would be just a couple of weeks,” she says with a rueful laugh.

Dr. Childers applied for USAHS Institutional Review Board (IRB) approval, and the IRB committee worked over spring break to approve her project. Meanwhile, a member of the IRB committee was advising an OT student who was looking at a very similar question. Maybe the two could join forces?

Salina Jivan was working on her capstone project for the Doctor of Occupational Therapy (OTD) program in San Marcos. Originally, she planned to explore why some seniors don’t engage with their neighborhood senior centers. But when COVID-19 hit, those centers closed. “With the virus becoming a new barrier to meaningful social interaction and social participation in the community, the increased risk for social isolation took on a new importance,” Jivan writes.

She joined Dr. Childers as a co-investigator in the IRB-approved research project. She also conducted a separate needs assessment of senior centers. Jivan says that her special bond with her grandma, who helped raise her, stoked her desire to work with the geriatric population and to investigate how occupational therapy can help overcome barriers and the impact of social isolation on seniors. 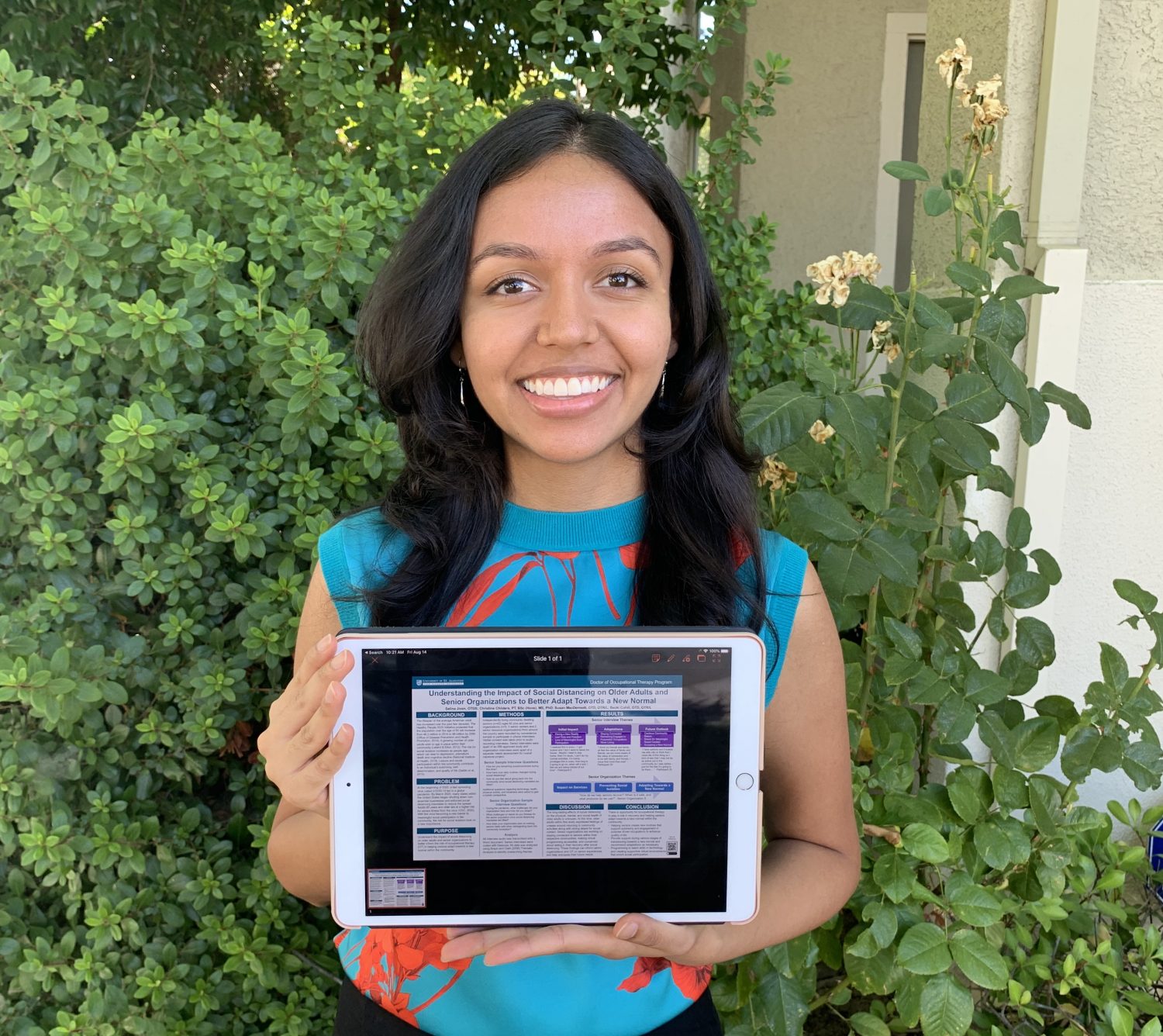 Through word of mouth, Dr. Childers and Jivan built their participant pool to include 42 people over age 65 from 12 states. Participants were mostly (though not all) Caucasian and from a comfortable socioeconomic status. These were the participants whom the academics were able to find on short notice through their connections.

Dr. Childers had written interview questions from a PT and general health perspective, such as, “Are you participating in physical activity—if so, what and how often?” She was concerned that many elderly loved ones would no longer be getting exercise, which could lead to long-term deconditioning. She says that when Salina joined the project, “she added several questions from an OT point of view that I hadn’t even thought of.” For example, “How have your daily routines changed during social distancing?” and “How do you feel about going back into the community once social distancing mandates are lifted?”

“I was thrilled to get Salina and to have her OT perspective,” says Dr. Childers. “Plus, we were able to conduct and transcribe 42 interviews within 30 days. The project would never have evolved into something this big, had Salina not joined.”

The admiration was mutual. “We collaborated well,” Jivan says. “Dr. Childers was able to provide me with helpful insight on the qualitative research process, since it was my first time. She is a very knowledgeable therapist, and I love her enthusiasm for allowing me to bring my OT perspective to this project. Overall, it was a great experience.”

The researchers conducted the interviews in May, when social distancing mandates were relatively new. “Most participants were relatively positive and matter-of-fact,” Dr. Childers says. She was pleased to find that, while a few participants said their physical activity had declined significantly due to fitness center closures, most were getting exercise by walking.

Participants were asked to rate their loneliness on a scale of 1 to 10. Researchers found that scores were directly related to participants’ age and whether they lived alone. Two people said that they wanted to be interviewed just to have someone different to talk to.

Even so, Dr. Childers was surprised to see how many people rated their loneliness at “1.” Some said they were accustomed to living alone and that their life hadn’t changed much, apart from the cancellation of their usual social activities. Some were meeting in creative ways, such as a driveway happy hour, roof parties in a senior condo community, or Zoom parties with different themes. Most had friends and neighbors checking on them. When asked about the benefits of social distancing, some said that slowing down was a good way for them to prepare for retirement.

More than senior isolation, participants noted feeling fear and depression related to too much time watching the news, as well as frustration with contradictory public health advice and with people who weren’t following the mandates.

One common theme was losing time: the older adults lamented that their trips to see their grandchildren and loved ones had been canceled, and that they couldn’t enjoy their retirement years in the ways they’d expected due to the risk factor. They realized they may have already experienced their last cruise or attended their last baseball game. Some, though, expressed gratitude that they were doing okay relative to those who had lost their jobs or were in more fragile physical health.

Participants looked forward to returning to a higher quality of life with increased social connection after the pandemic, such as attending gatherings and hugging friends. “We are more aware than ever of the value of connection and being with family and friends,” said one senior.

However, most said it would be a while before they would feel comfortable returning to the community because they were at high risk for complications. Said one participant, “I may not be as active out in the community as I was before—just for the fear [the virus is] going to be there.”

As a general finding, the researchers discovered that older adults who remained engaged in meaningful activities were adapting better to social distancing.

Dr. Childers is working on a poster presentation and journal article. She hopes to enlist another OTD student to help her with a follow-up study to see if participant responses have changed over time.

Jivan shared the results of the study from an OT perspective with her peers in August during a virtual capstone symposium. “The transition to a new normal will come in stages,” Jivan says. “Senior living centers and OTs can help an older person adapt their current routines to create a sense of normalcy through regular activities, such as FaceTiming the grandkids weekly. We can help them with any adaptations they need, like building virtual programming that’s more engaging.”

Jivan’s grandmother watched the video of her presentation. “Although English is not her first language, she was very excited to watch and proud to see me present,” Jivan says. “I tried my best to translate the overall focus of my project. Even if she only understood a little, I was happy to see her smile and share this moment with her.”

Jivan says she chose USAHS because she wanted to be in Southern California and she likes the university’s blended learning format. “I like that I could come to class and learn hands-on, but I could go home and study at my own pace. The sim lab is very helpful. When I went to do my clinical fieldwork, I didn’t feel intimidated at all—the school had really prepared us.”

She enrolled in the doctoral program because she wanted the opportunity to hone her research and needs assessment skills. She is currently studying for the board exam. Once she is a licensed OT, Jivan wants to work in a geriatric setting such as a skilled nursing facility, inpatient rehab, or home health, creating community-based programs that help the elderly.

The University of St. Augustine for Health Sciences (USAHS) offers hands-on Master of Occupational Therapy (MOT) and Doctor of Occupational Therapy (OTD) degrees. Practice with mock patients in our state-of-the-art simulation centers and learn anatomy with our high-tech tools. Prepare for clinical practice with patients across the lifespan, as well as advanced roles in research, practice leadership, and policymaking. Residential and Flex (online/weekend) paths are available. We also offer an online Post-Professional Doctor of Occupational Therapy (ppOTD) program designed for working clinicians and healthcare educators, with optional on-campus immersions and an annual interprofessional trip abroad.