Finding the perfect wave, slotting into the barrel, avoiding a major wipeout—these might seem like the biggest tests a competitive surfer can face. But if you’re an adaptive surfer with a spinal cord injury, making it from the parking lot to the water’s edge can present a challenge that’s not just gnarly—it’s also frustrating, exhausting, and disheartening. And that’s all before the competition even begins.

Enter Beach TraxTM, an invention from Kelly Twichel and Eric Packard, who graduated in August from the Master of Occupational Therapy program. As a project for Maureen “Mo” Johnson’s Assistive Technologies class on the San Marcos campus, they invented a collapsible track that can be laid underneath a wheelchair to allow it to cross sand smoothly. The portable pathway is on track to be patented and available for retail sale by the end of 2018.

“The other mats out there are solid and very heavy. They require more than one able-bodied person to set up and transport, and they cost a lot of money,” Twichel says. “Our product is lightweight, it works, and it’s giving people the dignity and independence that they want. That’s a really good feeling.” 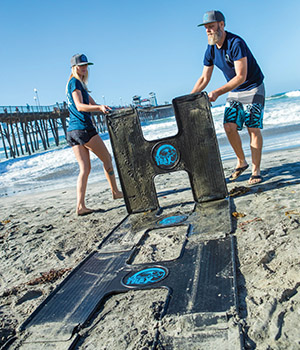 Packard, who has a background in landscaping, started the prototyping process by cutting a four-inch drainpipe and using it as a track for a standard wheelchair. The pipe kept buckling. So he and Twichel made one of many trips to Home Depot, and picked up plastic rain gutters. They posed the same problem. The team realized they needed a track with more surface area.

They found success with a 10-foot roll of chicken wire zip-tied to six-inch-wide aluminized rain gutter covers. Then they laid another sheet of chicken wire on the top. To keep the whole thing stable, they ran PVC across the chicken wire, cut it all in three-foot sections, then folded it on top of itself so it was portable. Then Twichel and Packard took the product to the beach in Carlsbad, California.

“I got from the parking lot to the sand with no issues,” Packard says. “It was a fairly smooth ride. There’s a good incline on that beach, and we were able to go down it safely. We could push each other up the incline. Our design worked.”

Then it was time to field-test Beach Trax with five adaptive surfers at a professional surfing event.

“We had to get all the surfers from the parking lot to the water or awards ceremony with only 20 feet of track in two 10-foot sections. We were sweating by the end of it,” Packard says. “One surfer said it was the first time in 10 years he was able to get across the sand without scooting himself.” Most competitors rely heavily on volunteers to carry them across the sand at events, and were glad to use the pathway to wheel themselves for a change. “These athletes compete in sanctioned events, and it can be disheartening to be carried by another adult. They want to do it independently.” 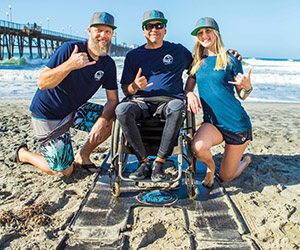 Helping people regain independence and dignity is a driver for both Twichel and Packard. Packard went into OT to help people like his little brother—who is autistic and nonverbal—live as independently as possible. Twichel was introduced to OT when she was 15 and her mother suffered a massive stroke.

“I saw what OT could do for her dignity and independence,” she says.

The Assistive Technologies class allowed Twichel and Packard to combine these personal passions with classroom-based knowledge to create something innovative and practical. They plan to improve the design so it can be used on other challenging terrain.

“We can help so many more people,” Twichel says. “It’s inspiring.”

WANT TO TURN YOUR PROJECT INTO A PRODUCT?

Here are some tips from Twichel and Packard: