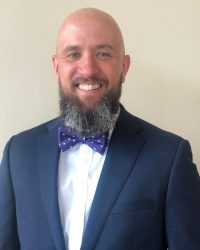 Christopher Ebner has worked as an occupational therapist in the Department of Defense (DoD) over the last 15 years. He served four years on active duty, as an Army officer, in the United States Army Medical Specialist Corps. During his active duty time, Ebner worked as a clinician at both Walter Reed Army Medical Center in Washington D.C. and Brooke Army Medical Center in San Antonio, Texas. Following his separation from active duty military service, he transitioned into his clinical career as Army civilian in the Department of the Army. During his civil service time in the Army, he practiced in a variety of clinical settings in both the United States and overseas. He served as the Battalion Occupational Therapist for the Warrior Transition Battalion-Europe in Germany for a period of four years. He is a level II certified clinician in the administration of Functional Capacity Evaluation testing with the BTE EvalTech system.

Master of Science Occupational Therapy, University of Alabama at Birmingham
Bachelor of Science Psychology, University of Alabama at Birmingham
Clinical practice areas include outpatient rehabilitation, orthopedics, and low vision rehabilitation. His passion entails working with individuals who have sustained amputations and poly trauma. Christopher has been involved with a multitude of clinical research initiatives over the course of his clinical career. Christopher accepted a faculty position on the Austin campus in November 2018. In conjunction with his Master of Science in OT, Ebner also holds a post professional graduate certification in low vision rehabilitation from the University of Alabama at Birmingham. He is currently working towards completion of his Doctor of Education in Sports Management at the United States Sports Academy. His current research priorities pertain to how individuals who have sustained amputations, limb salvage, and other types of poly trauma injuries engage in both leisure and professional sports. Specifically, he is interested in investigating how sports can be a multiplier for individuals as they rehabilitate, the psychosocial factors associated with sport engagement following injury, and the neurocognitive differences between disabled athletes compared to non-athletes.