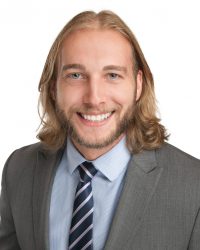 Dr. Peyton Sykes graduated from Stephen F. Austin State University in Nacogdoches, Texas, with a Bachelor of Science in Kinesiology in 2009. In 2014, he earned his Doctor of Physical Therapy at the University of St. Augustine for Health Sciences in Austin, Texas.

He has since worked primarily in the Austin community as an outpatient orthopedic clinician, furthering his education and skills by completing the Orthopedic Residency through Evidence in Motion in December 2016 and sitting for the Orthopedic Clinical Specialists (OCS) exam through the American Board of Physical Therapy Specialists in March of 2018.

In 2017, he transitioned to working as a travel PT in various acute care hospitals while beginning his educational journey as a contributing faculty member at USAHS. He became a full-time core faculty instructor for the Flex DPT program in April 2018. His goals include pursuing research and educational implementation of the science of pain and therapeutic alliance.