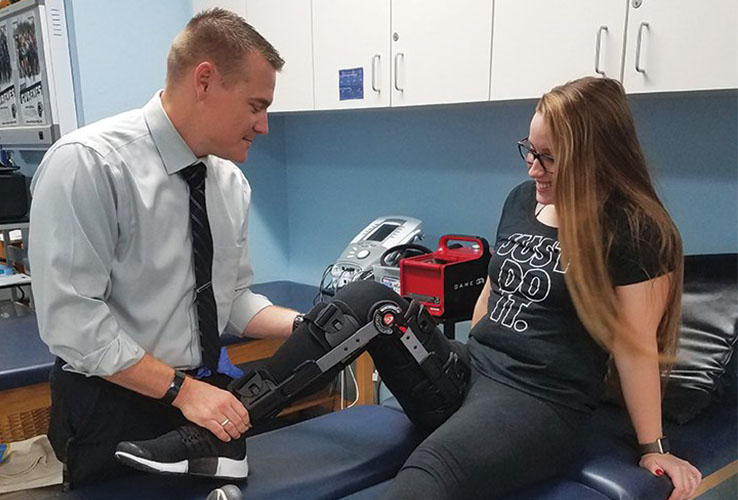 As an athletic trainer at Ave Maria University in Florida, Jeremy Howard ’16 doesn’t just care for student athletes’ bodies. He also cares for their minds. The Master of Health Science (MHS) with a specialization in Athletic Training graduate and a Doctor of Education (EdD) student recently helped the university’s athletics department update its concussion policy to include a “return-to-learn” protocol for athletes.

Most people know the physical symptoms of concussions: headache, nausea, vomiting, and balance problems. Universities across the country take this into consideration when deciding when an athlete can “return to play.” But concussions can also cause cognitive symptoms like trouble concentrating and retaining information.

He cites a 2014 study published in Canadian Family Physician that found nearly 45% of 159 school-aged students with concussions returned to school too soon and experienced recurrence or worsening of symptoms. “We know they need cognitive rest, but many students go right back to school,” Howard says.

To improve recovery for Ave Maria’s student athletes, Howard and the director of sports medicine implemented a multi-staged, return-to-learn policy last fall. Measures include everything from eliminating reading, television, and classes to taking extra breaks and having a note taker assist students throughout their recovery.

At Ave Maria, a basketball athlete who suffered a concussion a week before finals was one of the first students to benefit from the new policy. The university allowed her to postpone testing until January when she fully recovered.

Howard argues policies like this should be instituted for all student athletes. “Coaches and faculty must be educated about the cognitive symptoms student athletes face after a concussion,” Howard says. “Having a return-to-learn protocol not only does this, it also shows your investment in students’ long-term health.”

“Coaches and faculty must be educated about the cognitive symptoms student athletes face after a concussion. Having a return-to-learn protocol not only does this, it also shows your investment in students’ long-term health.”

For some, simply moving the eyes and head up and down to look at a classroom white board stresses a concussed brain. “Each student needs an individually tailored accommodation plan,” Howard says. “It’s not as cut and dry as return to play is.”

Returning to an academic setting too soon can prolong symptoms and delay recovery, putting athletes at risk for further injury.

A delayed recovery can also lead to poor grades. “Not only can that affect athletes’ abilities to graduate, it can also affect their lifelong success as professionals.”

Tuition Reduction Available for Select Programs When You Start this Summer!

Graduate school is an investment in your future: Earning an advanced degree is a way to boost your credentials and open more doors in your career. And at USAHS, you

Nurse practitioners and physician assistants are advanced healthcare practitioners with similar responsibilities, such as diagnosing illnesses and prescribing medications. However, their training and paths toward certification differ in significant

As an occupational therapist (OT), you will have the opportunity to specialize in one or more areas over the course of your career. Adding a specialty demonstrates your knowledge of

In January 2021, when the COVID-19 pandemic was weighing heavy on society, students were learning at home, and the Black Lives Matter movement was inspiring demonstrations for equality around the

Occupational Therapy vs Physical Therapy: What Are the Differences? | USAHS

Physical therapy and occupational therapy are both rehabilitative disciplines that require hands-on work—leading many people to believe they are interchangeable. However, these professions vary greatly. When deciding which healthcare career

For Pride Month, we’re focusing the USAHS blog on topics relating to the LGBTQIA2+ and other intersectional communities. For this post, we spoke to Matthew Chase, MASP, MLIS, a