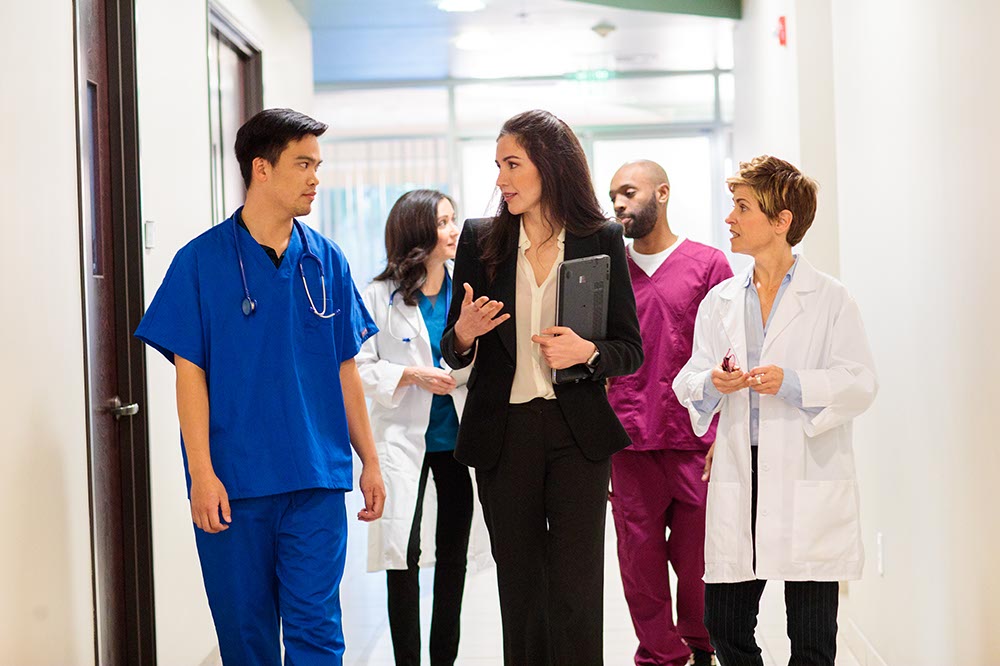 Identify Signs of Human Trafficking in Our Continuing Education Seminar

“I was working in the ER,” remembers Amy Herrington, DNP, CEN, CNE. “We had a farmer come in with migrant workers, all of whom had green tobacco sickness, a kind of nicotine poisoning from wet tobacco absorbed through the skin. They were in the ER for 16 to 18 hours because the men were so sick.”

At the time, Dr. Herrington was the Emergency Department patient care manager at a large Kentucky hospital. She recalls, “The farmer spoke for the men. We thought he was being so nice, taking care of them. The men indicated that they did not speak English and the farmer interpreted for them. They were not interested in using the interpreting service and looked to the farmer to speak for them. But now, looking back, I wonder whether those gentlemen were allowed to speak for themselves or leave.” Had she witnessed a case of labor trafficking?

“Most of us [nurses] have seen suspicious incidents like this over the course of our careers,” says Dr. Herrington, now a faculty member in the nursing programs of the University of St. Augustine for Health Sciences (USAHS). “We look back and wonder…’what was really going on?’” Today, all nurses need to be trained in recognizing the warning signs of human trafficking, she says. Human trafficking is a growing problem, and some state licensing boards, Florida’s included, are requiring nurses to obtain continuing education credits in this subject.[1]

“When people hear the term ‘human trafficking,’ they usually think of sex trafficking, but billions of dollars are also made each year worldwide in labor trafficking,” Dr. Herrington says. “It’s a kind of modern-day slavery. People are forced to work in restaurants, hotels, or massage parlors. Sometimes whole families are held captive. Victims rarely self-report for fear of retaliation, or—for immigrants—fear of deportation. It’s a growing problem because exploiting people is a profitable business.”[2]

What is Human Trafficking?

The National Human Trafficking Hotline defines human trafficking as a crime that occurs when a trafficker uses force, fraud, or coercion to control another person for the purpose of engaging in commercial sex acts or soliciting labor or services against his/her will.[3] The lines blur between sex and labor trafficking because many cases involve both.

Poverty is a primary risk factor, along with recent migration/relocation—of immigrants but also of people displaced by natural disasters such as hurricanes. Other risk factors include substance use and mental health issues; for children, running away or being part of the child welfare system. Although people across genders, ages, and races are affected, women and people of color are disproportionately represented.[4]

There is no official estimate of the total number of human trafficking victims in the United States, but the Polaris Project, which runs the National Human Trafficking Hotline, estimates that the number reaches into the hundreds of thousands each year.[5] In 2017, 10,615 individual victims contacted the Hotline, a 13 percent jump in cases from 2016.[6] In 2016, 7,572 victims were reported to the Hotline, a rise of 24 percent from the 5,961 cases reported in 2015.[7] However, this phenomenon is vastly underreported.

The most common form of trafficking reported was sexual exploitation taking place in hotel rooms and at private parties advertised as “escort services.”[8] Mail-order brides are another form of sex trafficking. U.S.-born adults and children are most likely to be victims of sexual exploitation and to be forced into door-to-door sales. Polaris’s 2017 report “The Typology of Modern Slavery” classifies U.S. human trafficking into 25 distinct areas of work.

Exploitation in the agriculture, tobacco, and construction industries typically involves men from Mexico and Central America. In the beauty business, such as nail and hair salons, trafficked workers are women from China and Vietnam.[9] In the healthcare industry, most victims are women from the Philippines, West Africa, and the United States working in nursing homes and as home health aides.[10]

Geographically, California, New York, and Florida currently lead in the number of cases in the United States. Some of the more disturbing types of trafficking include the selling of children for adoption, forced begging (the victim takes money back to the handler), and organ selling (the person is abducted and their kidneys or other organs sold).

What are the Signs of Human Trafficking?

Nurses and other healthcare workers are potential points of access to help for survivors. Dr. Herrington lists several signs that nurses should look out for:

Dr. Herrington notes that sex trafficking and labor trafficking may manifest different physiologic changes, such as a sexually transmitted disease versus an injury. However, victims typically have the same detached/withdrawn affect and communication problems, and the handler’s behavior is similar.

When asked how a nurse can distinguish between human trafficking and domestic violence in cases that may look similar, she replies that it is not the nurse’s responsibility to distinguish the type of abuse. The nurse should call the police and let them take it from there.[12]

What to Do if You See Signs of Human Trafficking

Dr. Herrington advises nurses to not directly ask a possible victim whether they are being trafficked if the captor is present. It’s better to step out of the treatment room and ask a colleague to notify police without the victim and handler’s knowledge. Delay and detain them until the police arrive, while keeping the victim safe and protected.

The police will refer the victim to safe homes and services. State and community resources form a coalition, helping victims get housing, food, transportation, and clothing, and counseling. However, gaps are reported in services for victims of trafficking, with male victims and LGBTQI individuals finding it more difficult to access services.[13]

How You Can Help Increase Public Awareness of Trafficking

Nurses can play a role in educating the public by hanging flyers about human trafficking in their workplace, listing emergency phone/text numbers; offering seminars and webinars on the topic; and interacting with at-risk groups.

If you observe people you suspect as engaging in human trafficking, you should report your observations to local law enforcement or call the National Human Trafficking Hotline at 1-888-373-7888. The Hotline and the BeFree Textline provide survivors of human trafficking with a variety of options to get help and stay safe. These include connecting callers with local law enforcement, emergency shelters, transportation, trauma counselors or a range of other services and supports.

Continuing education participants can purchase the two-hour module, which has voice-over PowerPoint and a review of scenarios, for only $25. Upon successful completion of the module, participants receive credit hours toward licensure in Florida.

To learn more about this module and other USAHS continuing education offerings, visit usa-cpe.edubrite.com.

U.S. Department of Health and Human Services, “10 Ways You Can Help End Trafficking”