Blog home  >  Occupational Therapy OT  >  ‘Thanks for the Ki…

In a life-long career as an Occupational Therapist, Mary Jo Ray-Jewett has been helping others her entire life.

So, when she learned her 12-year-old neighbor, Will Walker, needed a kidney, she got tested to see if she was a match. She made the decision to donate her kidney without any hesitation.

“To me, this is what your do for somebody else,” Mary Jo said. “It’s one human helping another.” 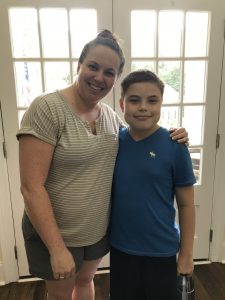 Mary Jo, is currently enrolled in the Post-Professional Doctor of Occupational Therapy program at the University of St. Augustine for Health Sciences. She has been an Occupational Therapist since 2004, and an OT in the Gwinnett County Public School system, where Will is a student, since 2014.

Mary Jo shared that her younger daughter was having difficulty adjusting and meeting friends in the new neighborhood. Will was the first kid who came to the door, introduced himself, and asked her daughter to play.  It was from that moment that Will had a special place in Mary Jo’s heart.

The Jewetts and the Walkers had a typical “neighborly” relationship for 3 years – waving from across the street, taking care of the dogs when they were out of town, small talk on the sidewalk, helping in emergencies, and when kids miss the bus, etc.

In December of 2017, Will had a physical and his pediatrician concluded that he had stopped growing. Something was off. This led to two months of testing – GI scans, blood cell samples, organ panels, and more.

On January 12, 2018 just hours after leaving the hospital that took Will’s organ panel, his mother, Jenn got the call.

“Your son is in complete renal kidney failure, so you should come back to the hospital,” the doctor told her.

With his kidneys at less than 10 percent functionality, this sent Will on the fast track to treatment. Mary Jo just happened to be standing outside that day when Jenn got home from the hospital. She learned about Will’s condition even before Jenn’s husband did.

“You tell me what you need. Whatever you guys need you let me know,” Mary Jo told Jenn. “And if I could get tested to see if I’m a match, you tell me how to do that.”

Jenn assumed Mary Jo was just saying that to be nice but explained how to get the match testing started anyways.

After a year, Will’s kidney function fell below 5 percent, he started to feel sick and the medication was not doing its job anymore. With the possibility of dialysis looming over them, Will was officially put on the list for kidney donors. Three days later, he matched with a deceased donor.

“On February 2nd, we had a deceased donor transplant in Children’s Healthcare of Atlanta. Everything went great, but on February 3rd, he got a blood clot, and they had to remove his transplanted kidney,” Jenn said.

She was devastated and back to square one. With some post-surgery complications, Jenn had to put her own match-testing on hold. The process requires a lot of time and testing, and Jenn wanted to be with Will. So, she asked Mary Jo to move to the top of the list and get the rest of her work done. 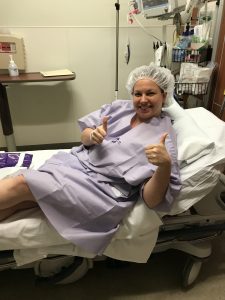 “She was on it,” Jenn said. “It normally takes six to eight months to finish the testing, and she got it done in three. She was a perfect match, which is unbelievable.”

Everyone started prepping for the surgery, which was set to happen in June, and the night before Mary Jo and Jenn were texting. Will was feeling a bit nervous and wanted to give Mary Jo a hug. He walked across the street and brought her a gift basket of things she could use in the hospital, a tumbler cup that read ‘I shared my spare,’ a blanket and other comforts.

“The sweetest thing was the blanket,” Mary Jo said. “It is really soft, and he said he wanted me to have a blanket because the blankets at the hospital are scratchy like sand paper.”

The surgery went flawlessly. The doctors said it was like Mary Jo’s kidney didn’t even know it was moved. It began functioning perfectly as soon as it was placed in Will.

The day after their surgery, Mary Jo asked the nurse to take her to see Will.  Standing beside his bed, Mary Jo said to Will “Thanks for the blanket, I’ve been using it!”

Both Mary Jo and Jenn agreed Will’s response was the highlight of the entire experience.

“Hey, thanks for the kidney,” Will responded. “I’ve been using it.”

There’s long road of checkups ahead to be sure Will’s new kidney is there to stay, but thus far, it’s been perfect.

Jenn and Mary Jo’s relationship has obviously changed since the kidney transplant. But Mary Jo doesn’t want to be known as the hero of the story. She simply helped a neighbor. Will wouldn’t have been able to live without Mary Jo’s kidney. So, she gave it to him.

“I know you don’t want to be a hero,” Jenn said to Mary Jo after the transplant surgery. “But you have to know that for us, that is all you’ll ever be.”

Mary Jo wants others to know they can get information on how to become a living kidney donor through the National Kidney Foundation (https://www.kidney.org/transplantation/livingdonors) or Donate Life (https://www.donatelife.net/). 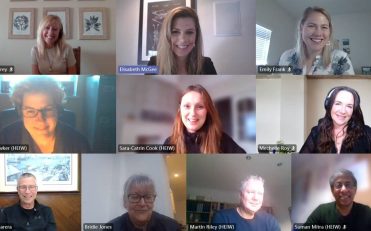 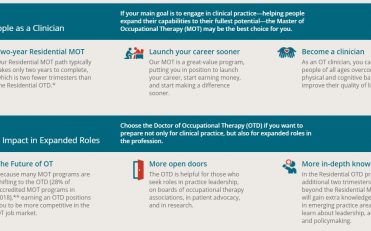 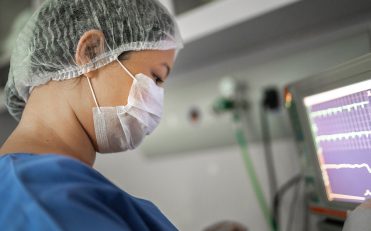 MOT or OTD: Which Occupational Therapy Degree Is Right for You? 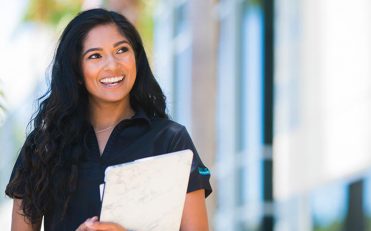