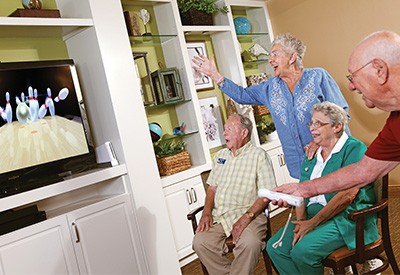 What do you picture when you hear the word gamer? It’s probably much different than the seniors Dr. Elizabeth Fain ’14, a Doctor of Education (EdD) graduate, has worked with at assisted living facilities.

“One of the most important ways to help older people stay healthy and more independent is to help them avoid falls,” she says. Occupational therapists can do that through education and exercise. “It can be hard to get people excited about typical programs, so I added a new element—the Nintendo Wii gaming system.” She followed the project with two research studies, which show that Wii helped residents increase their physical activity and led to more socialization outside their own rooms. “It’s a program that could work in any facility or clinic,” she says.

Here, Fain, who is an assistant professor of occupational therapy at Winston-Salem State University, shares a few of the benefits:

Cancellation rates are lower. Because the activity is fun, people join more frequently. “Choose a game that reminds them of activities they enjoy,” says Fain.

“Bowling, fishing, and hunting games can be a good fit. I have residents who still remember me a year later. That’s how big an impact it made.”

It’s easy to adapt for different physical abilities. “People can play while sitting,” she says. “If they have trouble grasping, the controllers can be adapted.”

It increases self-advocacy. “When residents realized they could be successful with this activity, they became more self-confident and started doing more for themselves,” Fain shares.

Residents and families reconnect. Not only does playing Wii encourage residents to socialize with each other, family members also enjoy participating. “We had a number of family members join,” she notes. “They were so happy to see their loved ones animated and active.”