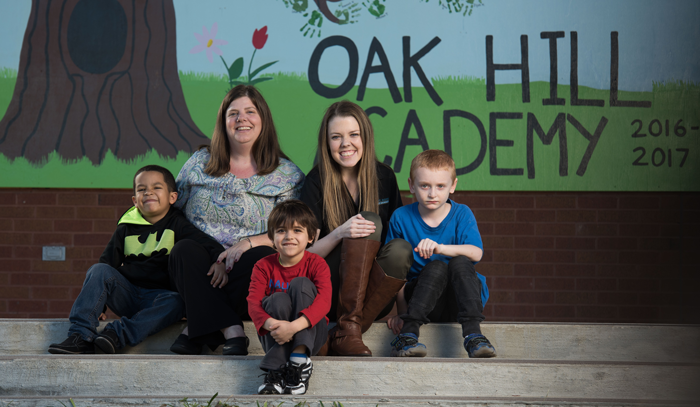 Where others see a blank wall, Kayleigh Quinn sees an opportunity to brighten people’s lives—especially children’s. The Master of Occupational Therapy student at the University of St. Augustine for Health Sciences has painted two murals in northeast Florida: one in 2015 at a pediatric clinic near Palatka and another that she completed in November at Oak Hill Academy in Jacksonville.

Oak Hill Academy, which serves students with autism spectrum disorders, opened at the beginning of the school year and wanted to celebrate its inaugural class. Faculty members Gayla Aguilar, OTR/L, OTD, and Bonnie Decker, MHS, OTR/L, EdD, were at the school and recommended Kayleigh.

The academy’s logo is an oak tree and its mascot is an owl, so Kayleigh painted both on a wall outside the cafeteria with help from occupational therapy students Sarah Pirie and Meredith Marlowe. What makes the mural even more special is that they added a handprint (modeled after the logo for an autism organization) for each of the 125 students with their names underneath.

“For me it was a small effort, but you can tell that for the teachers and students, it’s a big deal,” Kayleigh Quinn says. “The principal said that every time the kids walk by the mural, they are amazed by it.”

Art, education, and healthcare are a natural fit for Quinn. Her mother is a middle school art teacher, so she spent a lot of time in her classroom. Quinn also has Crohn’s disease, and she says that drawing helps her when she’s not feeling well. At age 14, she was hospitalized for eight weeks and had five surgeries. It’s an experience that got her interested in rehabilitative care and helping others.

“I had an OT and PT, but at the time I didn’t really understand how they were helping me. As I got older, I stayed interested in healthcare, and I loved working with kids,” she says. As an undergrad at the University of South Carolina, she volunteered with Big Brothers Big Sisters of America and helped raise money for Children’s Miracle Network Hospitals, where she got to know hospital staff and patients.

At the University of St. Augustine she likes that faculty get to know the students and their interests. “You can tell that the faculty members are genuinely concerned about your success,” she says. “I’ve been given so many opportunities outside the school. I love the fact that we start fieldwork almost from day one because that’s how I learn—by doing it and getting advice so that I do it better the next time.”

Oak Hill Academy is so happy with the mural that Principal Stephanie Smith asked Quinn paint another outside their media center. During the spring term, the Student Occupational Therapy Association plans to fundraise for the paint and supplies.