“I love these girls—they all have my heart,” says Madison (“Maddie”) Lovern, OTD, a recent graduate of the Doctor of Occupational Therapy (OTD) program on USAHS’ Austin, Texas, campus. She conducted the hands-on portion of her capstone project at a facility that fosters pregnant and parenting teens, most of whom are victims of abuse or sex trafficking. Dr. Lovern is one of several Austin OTD students who have recently worked with teens in local shelters for their capstone projects, under the guidance of doctoral coordinator Angela Blackwell, PhD, OTR.

When Dr. Lovern first arrived at SJRC (formerly St. Jude’s Ranch for Children) in January 2021, the teen moms were not exactly thrilled. “They said, right in front of me, ‘Who’s this new girl in this house? I can’t wait for three months to be over!’ But by the end, we were close, and they cried when I left. We had gained a level of trust and respect.”

SJRC’s campus in New Braunfels, Texas, keeps mothers and babies together, with the vision that they will be empowered to grow up into happy, productive, and caring adults. In early 2020, then-OTD student Cassidy Gravelle conducted a needs assessment of the facility, exploring how occupational therapy could help teens in this setting. One of the needs Dr. Gravelle identified was enhancing SJRC’s brand-new program in teaching parenting skills. She later served as a mentor for Dr. Lovern, who took the project further, working with ten girls ages 14 to 18.

“These girls have had a lot of trauma and are not always approachable,” Dr. Lovern says. “Sometimes, if you correct them, they fight back. But TBRI teaches them healthy relationship and communication skills.” She adapted the TBRI tools to be more relatable and interactive for the teens so they could use it with their children and each other. For example, they role-played scenarios for how to respond to staff members with respect versus without respect, using appropriate tone of voice, body language, and gestures. They also practiced how to handle a child’s temper tantrum using eye contact and soft touch rather than yelling and forceful touch.

“The moms took to it well,” Dr. Lovern says. “They even came up with their own scenarios to role-play. I did see some behaviors change, but there’s still room for growth. One girl said, ‘My mom yelled at me—why shouldn’t I yell at my kid?’”

To practice the occupation of parenting and increase the bond between parent and child, Dr. Lovern had the moms make origami fish, then read Dr. Seuss’ One Fish Two Fish Red Fish Blue Fish to their child, using the origami fish as props. “These are teens—they’re on their phones all the time,” she says. “They want to set their kid up in front of a movie and walk away. But activities like this show them the power of play.”

One challenge Dr. Lovern faced was how to build rapport with the girls, while maintaining healthy boundaries, during her trimester at SJRC. Some of the girls would confide in her as a peer, using adult language. “They had to grow up really fast,” she says. “I have to remind myself that they are 14 and I’m an occupational therapist.” Dr. Blackwell told her that when the girls ask for advice, “It’s okay not to have an answer. Just make eye contact and listen.”

At the end of the trimester, Dr. Lovern gave a presentation to SJRC’s CEO and program directors, whom she describes as “very enthusiastic. They are seeing the value of OT in this setting.” Staff member Roxy Hernandez, who served as an informal mentor, recently changed her position to continue Dr. Lovern’s parenting program.

Now, during the Summer 2021 trimester, Dr. Lovern is mentoring OTD student Clare Rogers, who is focusing on the occupation of home establishment and management with the teen moms. “I’m loving the mentorship part of it,” Dr. Lovern says. “I’m excited that Clare is coming right after me to provide continuity.”

“Maddie has been a huge help, sharing her experience and giving me advice and ideas,” Rogers says. She also found Dr. Gravelle’s initial site assessment helpful, identifying which SJRC programs could be strengthened from an OT perspective.

Rogers explains why she chose to focus on home establishment. “When kids age out of the foster care system, they don’t know where to go or how to get an apartment,” she says. “Teens with children are even more at risk for returning to the abusive home or situation.” She says Texas state programs offer low-income housing but don’t provide support with the application process—and certainly don’t teach people the social skills they need to get and maintain a home.

Rogers is in her seventh trimester, which is devoted to writing the capstone proposal. Next trimester, she plans to work on-site with the moms, using TBRI techniques to build trust. Her proposal includes teaching the moms how to conduct an online housing search, get transportation to the facility, and dress professionally. Rogers is also creating activities around budgeting, prioritizing expenses, and managing bills. Roommates will be another topic: How to set boundaries to feel safe, maintain a healthy roommate relationship, and communicate the need for space.

“I feel so excited to be able to offer these girls something beneficial,” Rogers says. “I want to be that person who gave them something, listened to them, showed some love, had an impact.”

Working with Teens in an Emergency Shelter

SJRC isn’t the only facility where USAHS Austin students are working with teens. Nikki Nguyen, OTD ’20, and Elizabeth Valera, OTD ’21, conducted their capstone projects at Parks Youth Ranch, an emergency shelter in Richmond, Texas. At the 24-bed facility, abused and neglected boys and girls ages 7 to 17 benefit from counseling and the therapeutic effects of nature. Stays are typically 90 days until the young person is taken into foster care, adopted, or moved to a different facility.

“Many of the kids come from households with domestic violence,” Dr. Nguyen says. “They have slipped academically and have aggressive behaviors; some have been in juvenile detention. We want to acknowledge the childhood trauma so they can understand themselves better and navigate the world better.”

To that end, Dr. Nguyen created a program to teach the kids that “it’s okay to be angry and sad, but they need to learn how to handle their feelings.” Her program combined the Empowerment principle of TBRI with two OT systems that help with emotional modulation: the Alert Program® and the Zones of Regulation®.

The Zones of Regulation system organizes emotions into four colors. Red is angry or afraid; yellow is stressed but in control; green is ready and calm; blue is sad, bored, or tired. Dr. Nguyen created activities for youth and staff to name their emotions according to the zones, along with related breathing and physical exercises to bring them back to green. She gathered her treatment ideas into a manual about youth self-regulation and gave a presentation about it to staff, who “really appreciated the program,” she says.

She says Dr. Blackwell gave her valuable insights and advice. “She was a great mentor and support system. I don’t know if I could have done this without her.”

Dr. Nguyen has taken a professional interest in the mental health of adolescents in part for personal reasons. “Growing up, I had a lot of emotions that I didn’t understand,” she says. “I remember feeling sad and not knowing why.” During the pediatric rotation of her clinical fieldwork, “I learned more about myself. I knew I could translate that insight into helping teens learn more about themselves.”

She says that in casual conversation, some kids would volunteer information about their lives and the circumstances that brought them to the shelter. She learned to let them lead the conversations. She worked on-site at the facility until two students tested positive for COVID-19. Fortunately, Dr. Nguyen tested negative, but she had to work with the students online for the rest of the trimester and was unable to implement the program to the extent she had planned.

Getting Back to Green

After Dr. Nguyen graduated, Elizabeth Valera, OTD ’21, began working onsite at Parks Youth Ranch, which had reopened to visitors. Dr. Valera created a different but related program focusing on the Zones of Regulation®. She had the kids play mud volleyball, giant Twister, relay races, and more, incorporating the four zone colors. “At first, the kids had attitude,” she says. “But over time, they really enjoyed it.”

Every day, kids and staff would check in about which zone they were in. “Some kids would be vulnerable and admit they were in yellow. I would say, ‘Here are tools to get back to green.’”

She says that in general, the boys she worked with were less vocal than the girls about naming their emotions. However, one 13-year-old boy, who was responsible for his younger siblings, wrote about how his removal from the family was tearing it apart. She describes another boy as “sweet and respectful but a fighter: He punched a tall boy. But he would check in with me, and he suggested taking a walk together on a day when I was stressed.”

The girls were typically more communicative, asking to speak with her privately about their conflicts with peers, caseworkers, and family members. Dr. Valera suggested to one girl that she write what she was going through on a rock and throw it into the river. She observed that girls who came to her privately were more likely to change their behavior and not fight others.

“I’m grateful for the kids who trusted me and took my advice,” Dr. Valera says. “I valued opportunities to relate to them, to share my story; to say, ‘I’ve been through something like you.’ I almost want to cry every single time.”

Dr. Lovern echoes this sentiment about her capstone project. “I’m thankful I did this—it was a wonderful experience.”

The University of St. Augustine for Health Sciences (USAHS) offers hands-on Master of Occupational Therapy (MOT) and Doctor of Occupational Therapy (OTD) degrees. Join a collaborative cohort of peers who learn under the mentorship of expert faculty-practitioners. Practice with mock patients in our state-of-the-art simulation centers and learn anatomy with our high-tech tools. Prepare for clinical practice with patients across the lifespan, as well as advanced roles in research, practice leadership, and policymaking. Residential (online coursework + in-person labs on weekdays) and Flex (online coursework + in-person labs on weekends) formats are available. 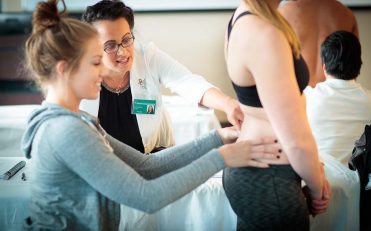 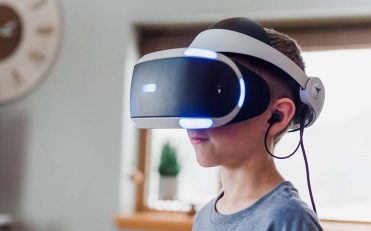