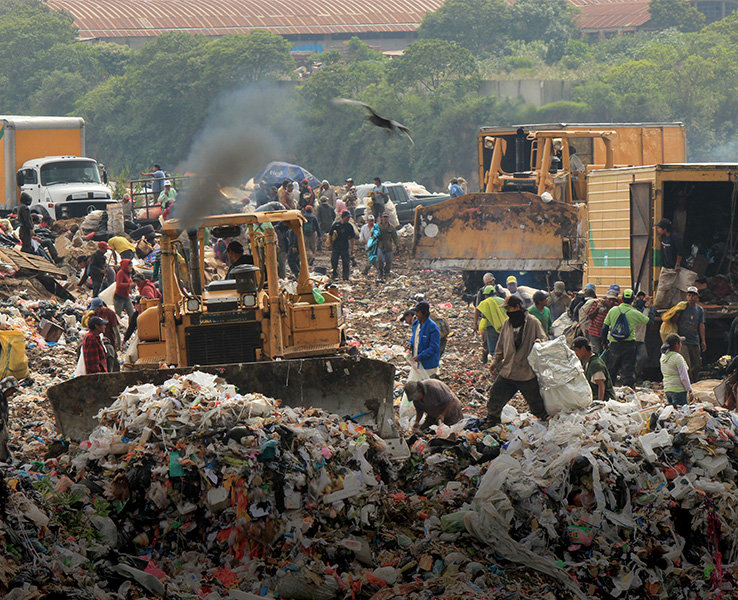 The smell of garbage and decay was overpowering. Their shoes sunk into the sludge. Vultures circled overhead. Black flies blanketed a dying dog. But the women kept walking. Access is severely restricted, but a local jefe gave them a tour of the Guatemala City Dump.

Thousands of people live on the edges of this 40-acre landfill, one of the largest and most toxic in Central America, where more than 500 tons of garbage per day is dumped. Locals scavenge through the trash, recyclables, perishables, and even bio-hazardous materials in the hopes of finding food or something they can sell—anything that might help them.

In October of 2014, two months before graduating from the Doctor of Physical Therapy (DPT) program, a small group of students, including Dr. Gabrielle Gianella ’14, Dr. Brianna Hinnenkamp ’14, and Dr. Janelle Villarreal ’14 went to Guatemala City as part of a medical mission led by Dr. Suzanne Fox Trotter, a faculty member on the Austin campus. In conjunction with Potter’s House Association International, the group offered physical therapy for a week in a small clinic at the entrance to the dump. 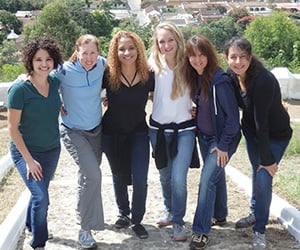 This was not Trotter’s first visit to the Guatemala City Dump. Several years before, she had traveled there with her church to help build homes and work at a school affiliated with Potter’s House. The nonprofit offers humanitarian aid to people who live and work in the dump through education, leadership training, micro-business support, nutritional programs, and health care.

While there, Trotter mentioned that she was a physical therapist and was offered the chance to work in the charity’s bustling clinic. “As I saw patients I realized this could be really cool for PT students,” she explains. “All we need are our hands and our brains, and we can go anywhere.”

Back on campus, she talked about her experiences at the clinic, sharing pictures of the dump and describing the hardships the people face. “The students said, ‘Why don’t you take us?’ ” Trotter recalls. “I told them that it’s a very hard place to go. It’s poverty beyond anything I’d ever seen. They don’t have warm showers. The food can make you sick.” But that didn’t deter Gianella, Hinnenkamp, or Villarreal.

They were ready to pack their bags.

The view from the plane was breathtaking, with soaring mountains and lush green landscapes. “As we were flying in, I could see that Guatemala was just gorgeous,” Hinnenkamp says. She’d never visited the country before, although she’d done some community service in Brazil in college, which sparked her ongoing interest in volunteer work.

But the view changed dramatically as the group drove four miles from the airport to Guatemala City. Green grass gave way to trash-strewn pavement. A 4-year-old girl was walking alone, collecting bits of garbage. Sick dogs lay on the sides of the roads.

The small clinic was situated near the entrance of the dump, and from the first day they were posted there, the flow of patients was ceaseless and their conditions were wide-ranging: breast pain, neurological issues, genetic conditions, mobility problems. “I wasn’t sure we had the skills to help these people,” Villarreal says. 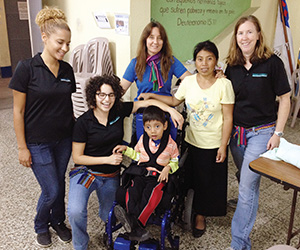 Throughout five jam-packed days, they each had a chance to put their education into practice while helping people in desperate need. Their decisions had to come fast, given the steady flow of patients and the limited time they had with each one.

But that didn’t faze the patients. Though they lived in stunning poverty and had received so little medical attention before, they were upbeat and optimistic. “They smiled, made jokes,” Gianella says.

“We didn’t have a lot of time with them. But they seemed so happy to have someone treat them—and look at them as though they were actually people.”

An elderly widow came in with a deformed arm, arthritis, and back pain from stooping to pick up garbage. After Gianella offered her some general mobilization of her spine, through a massage and ibuprofen, the woman gave her one hug, then another. “She said, ‘I can’t remember the last time I was touched by another person,’ ” Gianella remembers. “That was so powerful to hear.” Another patient, a 10-year-old boy who has spina bifida, had trouble getting in and out of his wheelchair. He’d briefly seen a physical therapist a few years before, but didn’t keep trying the exercises he was taught. Still, he showed them to Villarreal. “I realized then that I needed to educate him about the importance of the exercises,” she says.

When he left the clinic, she had no idea whether he had taken what she’d said to heart, until he showed up the next day. He reported that he stayed up until midnight working on the exercises. “He was very excited, motivated, and thankful,” Villarreal says.

“Coming out of my internships in the United States, it took me weeks to make that sort of impact in someone’s life. With this young kid, it took one day. It made me realize again that what I’m doing is very rewarding.”

She felt as though this experience pulled together everything she’d learned at the university—human anatomy, massage, soft tissue palpation, biomechanics, and modalities. “I also think that my clinical decision making class was really valuable,” she says. “It was so abstract to me in the classroom. But in the clinic we had to use critical thinking to figure out what was going on and how to help. It doesn’t sink in until you have to apply it. I realized I can think about things in an organized way and make good decisions.”

Access to the dump itself is restricted. After a fire in 2005, the city put up a wall and posted opening and closing times for the entrance gates, according to the Council on Hemispheric Affairs. Landslides also pose a threat—eight adults and two children were killed in one during 2008—as do the gangs that lord over the landfill. “The dump itself was one of the hardest things to see, the death and decay,” Trotter says.

“I’m proud that my students stepped in and took ownership in a situation where they had no idea what to expect. They could be dealing with wound care, or a simple knee problem, or a child who had a rare genetic condition,” she continues. “We didn’t have anything but our hands and our brains and a few medical supplies. But they were so willing to give.”

Although there was only so much that the team could do in one week, all graduates want to go back to Guatemala or volunteer in another country. Trotter plans to make this an annual trip. Her ultimate goal is to not only improve the locals’ physical conditions, but also to remind them of something they may forget as they pick through the trash day in and day out: They’re human beings, deserving of care and attention.

Have you volunteered in your community or participated in a service trip? Share the details by emailing [email protected].